Symptoms of Kidney Failure in Cats

Kidney failure can have a devastating impact on your cat’s kidneys, organs, and bodily functions. In today’s post, our Charlotte vets explain the symptoms of kidney failure in cats, in addition to potential causes and treatment options.

What is kidney failure in cats?

Kidney failure is also referred to as renal failure and can be caused by several conditions that can impact the kidneys and their related organs.

Today, we'll discuss the two types of kidney failure in cats, the many symptoms of both, and what can be done if you suspect your cat is suffering from the condition. 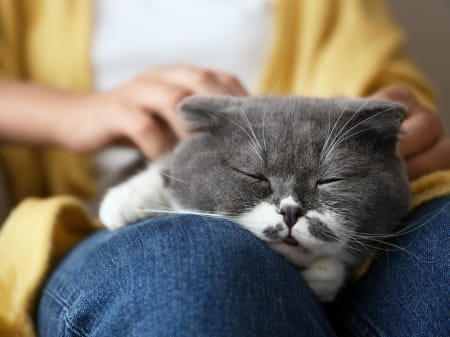 Are there different types of kidney failure in cats?

The two types of kidney failure in cats differ in causes, treatment options, and prognosis.

This type of kidney failure happens suddenly - over days or weeks. Cats of any age can experience the condition, which typically results from diseases, disorders, medications, organ failure, poisons, and other causes. If caught in time, acute renal failure can often be reversed.

In cats who have chronic kidney failure, the kidneys stop working gradually - over a period of months or years - as their ability to filter toxins from the blood decreases. This type of kidney failure can potentially lead to total kidney failure.

What causes kidney failure in cats?

Your cat’s kidneys have a filtering system that is made up of thousands of microscopic tubes (nephrons). While a kidney can still function if some of these tubes are damaged, if too many nephrons cease functioning at one time for the good nephrons to compensate, this can lead to kidney failure.

Immediately after kidneys fail, they stop clearing dangerous toxins from the blood. While cats’ kidneys can start to fail as they age, senior cats are not the only ones at risk (as we noted above).

Here are a few common causes of both acute and chronic kidney failure in cats:

What are the signs of kidney failure in cats?

In addition to these symptoms, signs of acute kidney failure include a stiff-legged gait (an indication that your cat’s kidneys are causing pain) or an arched back, and either frequent or no urination.

Chronic kidney failure can progress over time - perhaps a period of years - without being noticed. By the time even vigilant pet parents notice symptoms, the disease may have already advanced.

What are the symptoms of end-stage kidney failure in cats?

Sometimes, the signs of kidney failure in cats are not caught early enough and the disease progresses to its end-stage. Symptoms of end-stage kidney failure in cats include general symptoms listed above, as well as dull, sunken eyes, inability to walk, body odor, incontinence in bladder or bowels seizures, confusion, refusal to eat or drink, twitching, blindness, pacing and restlessness, withdrawing, hiding and running away.

Though more than one of these symptoms will be present, you may not see all of them. There may also be a sudden improvement in their symptoms, but do not let this fool you.

With kidney failure, there are no easy answers, as different symptoms may be present at different times. These symptoms can also be signs of other illnesses, which is why early diagnosis, disease management and communication with your vet is critical.

When it comes to symptoms of kidney failure in cats, the stage is key to prognosis. While there is no cure for chronic kidney disease if it’s detected and treated early your cat’s longevity and quality of life can be improved.

How is kidney failure in cats treated?

The goal of treating kidney failure is to slow the progression of the disease and manage symptoms. Depending on the symptoms and their stages, treatment options may include intravenous fluids to correct dehydration, vitamin injections, medication to manage nausea, supplements to correct low potassium levels, and other measures.

Our Charlotte vets are experienced at treating many conditions and diseases in cats, including co-occurring illnesses. Using advanced technology in our in-house lab, our veterinary team can provide same-day diagnostic testing and results for efficient, effective care.

For cats with end stage kidney failure, nursing them in their final days will mean keeping them warm and comfortable, with food, water and a litter box nearby, as well as lots of quiet human companionship.

If your cat is in pain with seizures, regular vomiting and soiling, you may want to discuss with your vet whether euthanization should be considered. Though this is probably the most difficult part of pet ownership, if all other measures have failed, it may be time.

Note: The advice provided in this post is intended for informational purposes and does not constitute medical advice regarding pets. For an accurate diagnosis of your pet's condition, please make an appointment with your vet.

Is your cat exhibiting symptoms of kidney disease or other serious illness? Our vets can diagnose and treat a wide range of conditions. Contact our Charlotte vets today to book an appointment for your feline companion.

Providence Animal Hospital has been providing comprehensive veterinary care for your cherished pets in Charlotte since 1993.